With Wings and Talons by Michelle Erickson (COS book 12, my 31st book) 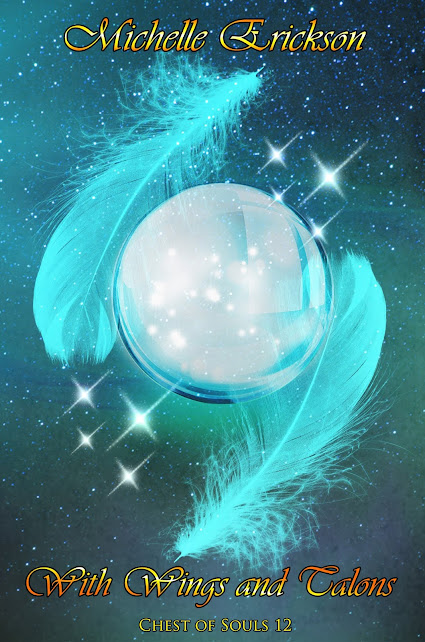 Blurb:
For Revaya and Pax,
there have been stumbling blocks on the path to the throne of Eos.
After preventing the complete genocide of grey-aerie,
Rozan-aerie has thousands of enemy eggs to take care of.
In their hearts, they’d rather scramble them.
It doesn’t help that her grandmother, Axe,
would hand them the skillet!
Trying to keep Benz alive isn’t easy either.
She left her books behind and took a leap into life.
Her curiosity and unbridled tongue are going to get her killed.
If Axe doesn't pluck her first!
A mysterious rogue harpy rules the castle in the sky
Unknowns make Revaya nervous.
Because in Shara, they usually spell death.
She has no way to find out if she’s in the spelling bee.
Short of flying up to have a look which would be an act of war.
The biggest stumbling block is the fact
they aren't full-blood harpies,
if Pax and Revaya dare approach Eos,
Axe says it could be a bloodbath.
She'll do everything she can to avoid it.
In their favor, Pax assures her,
Eos harpies have no idea what we are capable of.
But they're going to find out! We are going to win!
She wants him to be right,
but the time of the twelve is upon them.
It’s time to decide: peace, or wings and talons!

Background to this Cover story:

Originally, I chose a different cover, which I will use for End of Reason (two books from now). But when I saw this cover, I fell in love with it and wasn't sure which book I would use it for. I just knew that I had to have it.

If it hadn't been for this cover, the entire book would have had a different flavor.  I'm SO glad I was able to buy it from AK Cover design at selfpubbookcovers.